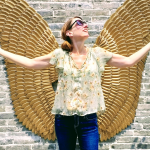 My first day of work in Hong Kong was Monday, September 17. On September 18, the company flew me to China along with my boss and some of our engineers for a tech conference on the Alibaba campus in Hangzhou. It was incredibly educational – and not just around the tech.

Hangzhou is beautiful. Its scenic lake surrounded by lush forest make it a major tourist destination for Chinese looking to vacation in China.

Imagine this view but so much better and swarms of cute tiny bats darting between people.

I was equally surprised by the natural surroundings and the sheer size of the city. Driving in from the airport I was taken aback by the cliff of lighted skyscrapers along the river. It made me realize how much of the world I don’t know anything about.  I couldn’t get a picture from the cab so thanks, David Zhou, for this one:

We moved to Hong Kong to get out of our bubble and China was really my first taste of culture shock.  It’s probably the most foreign culture I’ve experienced outside Bronies.

Total Illiteracy and Tech Isolation
Hangzhou is the first place I’ve visited were very few people speak English. In a way, it’s great that my American hubris finally caught up with me and I got to experience looking at a menu and not even being able to recognize a single character of the alphabet. I learned the critical phrases in Mandarin after the first day (thank you, I’m sorry, excuse me, toilet) but everyone laughed when I pulled them out. I had most success keeping a picture of a women’s room sign on my phone.

I thought I was prepared for the Great Firewall but still managed to forget and get frustrated every time I tried to Google something, pull up my maps, or access my Gmail.

China has it’s own version of these common services. Perhaps the most common is Alipay, used for payments, which can only be funded from a Chinese bank account or peer-to-peer transfer. Alipay is a phone app that is used by everyone from taxis to stores to restaurants to panhandlers. Seriously.

Technology and the Surveillance State
Alipay is awesome for empowering the rural Chinese who wouldn’t otherwise have access to banks or other financial services. It also, of course, allows the government to track every purchase.  I saw many fully automated shops (take that, Amazon) that would debit Alipay based on facial recognition.

Facial recognition… it was at every conference room door and every street corner. All tracked and stored, of course.

You might argue that this could be expected on a high tech corporate campus.  Part of what I learned, however, is the intimate relationship between Alibaba and the Chinese government. Hangzhou is a pilot of the “Smart City” being rolled out across China. And soon Kuala Lumpur. And then who knows.

Goddamn Squat Toilets
So, lots of amazing technology, right? And yet even the mega-advanced Alibaba campus used squat toilets.

I don’t know how the women in China do it. Anatomically.  I do, however, finally understand why women wore skirts prior to the advent of the crapper.  Now that was a real advance.

Food
From a culinary perspective, the trip was a contrast of profoundly amazing and really shitty meals.

Truly amazing was the “hot water boiled fish,” a very misleading name for a very spicy Szechuan dish that is going to be the first Hong Kong post on the food blog.  My mouth is watering just looking at this picture.

On the shitty side:

The final night of the trip the team and I went to a bar in the suburbs where we drank loads of Kronenbourg 1664, listened to Michael Jackson covers, and played dice games until the wee hours.

Check out the mural behind the stage.

In summary
There’s still much I want to see in China and we’re planning visits to Shanghai, Li River and more but , overall, I’m incredibly grateful to be back home in Hong Kong.

This site uses Akismet to reduce spam. Learn how your comment data is processed.

The cheapest Nobu on the planet, and a Manila tourist trap to take in without getting taken
November 5, 2018

The cheapest Nobu on the planet, and a Manila tourist trap to take in without getting taken
November 5, 2018

Manila, Philippines: Taking A Step Back for Perspective
October 29, 2018